Wrenches and grease, are items often involved when Mister and our son are bonding. That’s what I call the time they spend hunched over or laying under a vehicle as they solve an issue or replace a part.

In our family a picture like above would make a more realistic Norman Rockwell scene.

Mister and the son share a fascination and knowledge for anything motorized. Finding the right word to describe their hobby is tricky. Even, hobby, by its definition is misleading, because many things they work on out of necessity not choice. Sometimes the chore is physically taxing, and by their muttered words they don’t always enjoy what they’re doing.

What I know, is they can often listen to a sputtering engine, guess what’s wrong and fix the problem.

They can recognize a vehicle’s make and model with a glimpse of the grill or taillights. Mister more so with the older ones while the son has a keenness for exotic cars and newer models.

They dream and envision building the perfect shop, like the daughter and I do an extravagant barn.

The son drove tractors, lawn mowers, etc. long before having his licence. Behind the wheel of the family 4×4 truck he used gallons of fuel as he practiced in the field while Mister and his father baled hay.

Having children in high school can cause parents stress, but we were fortunate because of this interest our son developed. Instead of wondering if he was partying or getting into trouble, we could look out the back window up towards the shop and know him and his friend were inside. The distance between neighbors in the country allowed their music to play and the shop lights to burn long into the nights while the two of them tinkered on vehicles.

Our sons car which he’s had since late high school. Mister and I were on a trip when we got a call that him and his oldest sister found it for sale.

This is once it was home, and they removed the worn engine.

Then on a cold snowy winter night, as a family, we pushed and loaded the car onto our flat-deck for its ride to the high school the next day. There the son and his friend put a new motor in as a grade 12, Shop Class project.

After a few more changes, and additions this is how it turned out. 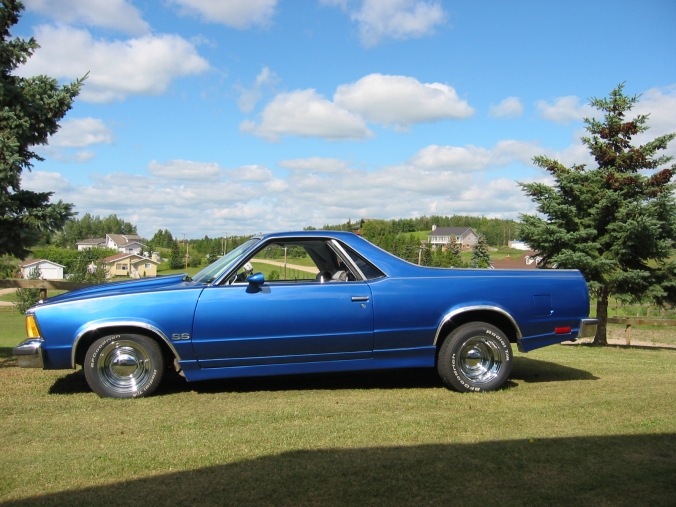 As silly as it sounds we’ve always named our vehicles, the son calls his car, “Sueño Azul,” “Azul,” for short. That’s Spanish for Blue Dream.

You know you have a car guy in the family when a picture of his daily driver, above, is enlarged and showcased on the wall of his home.

Encourage your children to have an interest or hobby and be grateful and embrace the opportunity if it is one you can enjoy together.

Does your child have a interest or hobby?

Did they pick it up from you or your spouse?

11 thoughts on “Our Version of a Norman Rockwell”