One was actually designed to save lives and one for saving time, yet both of these are sometimes referred to as tunnels. 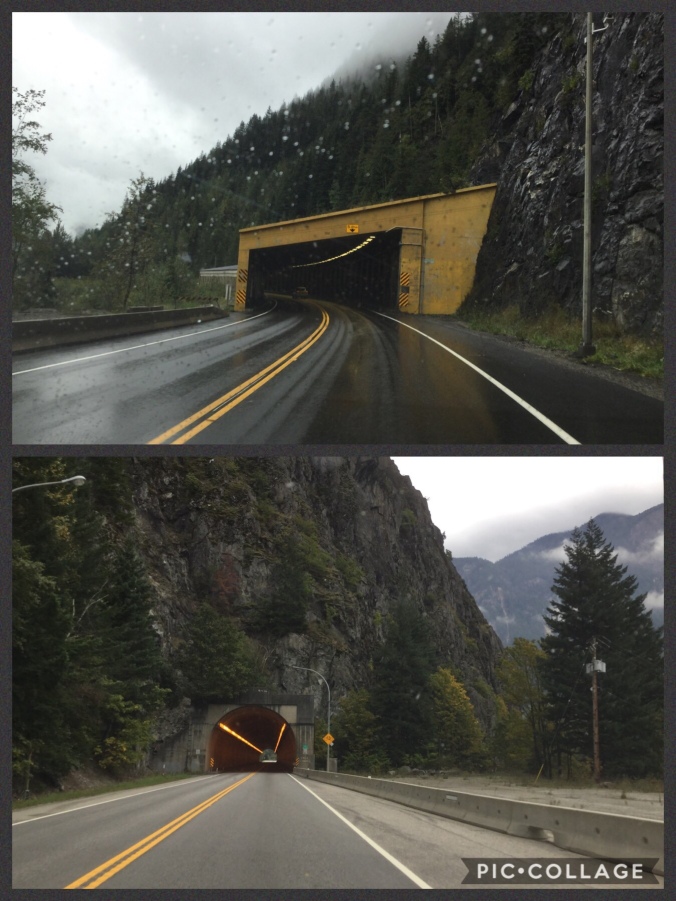 The one on the top is called a “Snow or Avalanche Shed”. The concrete construction deflects falling snow and water runoff allowing it to pass over top while traffic continues to flow underneath.

Between Golden, and Revelstoke, British Columbia, the Trans Canada Highway #1 winds through “Glacier National Park”. You’ll be much safer today, than in years past, traveling through its mountain range with a deadly history. Five snow sheds have been built on a stretch of this highway called the “Rogers Pass”.

Weather conditions can change drastically and quickly on the pass with a summit elevation of 1,330 meters/ 4,360 feet. Add, roughly 10 meters/32.81 feet of heavy snowfall per year to the sheer height and steepness of the Selkirk Mountains and you get perfect avalanche conditions.

Even with 31 wooden snow sheds over the rail tracks, for 30 years deadly avalanches plagued the railroad. In 1913 they began digging the 8.083 kilometre/5.022 mile tunnel called the “Connaught Tunnel” under Mount Macdonald. Once completed in 1916 trains quit going up and over the “Rogers Pass”.

Sections of abandoned rail line ground over the pass were later used for the current Trans Canada Highway #1 finished in 1962 and called the “Rogers Pass.” It replaced the older (1940-62) “Big Bend Highway” which followed the Columbia River for 305 kilometres/190 miles through the Selkirk Mountain valley. It was a seasonal, perilous, and gravel highway always closed in the winter because of heavy snowfall. The pass also shorted drive time between Golden and Revelstoke by 5 hours.

Tunnels like in the bottom picture are designed as shortcuts, or in the least a simpler path. The pictured one is 1 of 7 on the Fraser Canyon highway (the Gold Rush Trail) between Hope and Boston Bar. They were constructed in 1957-64, and range in length between 57 meters/187 feet to 610 meters/2000 feet.

Did you know the design differences of these tunnels before this post?

Have you ever encountered tunnels or snow sheds on a highway?

Since reading Stephen Kings novel “The Stand” years ago, I can’t help thinking of situations from that book when traveling through tunnels.

Has anyone else read “The Stand” and knows what I’m talking about?

22 thoughts on “Do You Know The Difference”